“Christian Dior: Couturier du Reve” (Designer of Dreams) was a masterpiece about a master.  After months of hearing and reading about this exhibition (and drooling over the extraordinary images), I had to see it for myself.  Although one never needs an excuse to go to Paris, there could hardly be a better one!  And what made the trip even more special were my traveling companions, my two daughters.  What could make for  a better girls’ trip than Paris and Christian Dior?!!

The exhibition at the Louvre’s Musee des Arts Decoratifs attracted thousands of visitors from around the globe.  Even with reserved tickets, there was a long line to enter — and those without tickets waited in line for an average of 5 hours!  But nobody complained.

The exhibition was an extraordinary retrospective of the seventy years since the creation of the Maison Dior. It explored the life and genius of Christian Dior, as well as also the work of the six artistic directors who followed Dior.

Christian Dior started his career as an art dealer in Paris, but the crash of 1929 forced him to close his gallery and he began to work as an illustrator.  His talents were quickly discovered and he began creating illustrations for some of the well-known fashion houses in Paris.  In 1946, he followed his dream and opened his own fashion house at 30 Avenue de Montaigne in Paris. 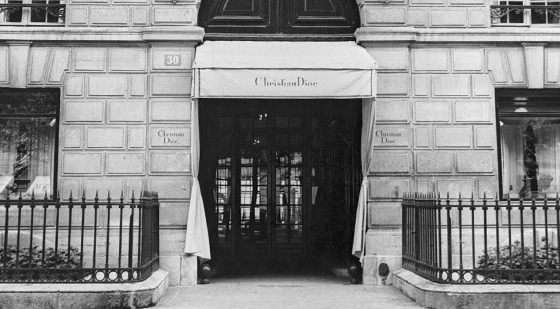 Even with the Allied victory in World War II, the mood was somber and fashion of the day was rigid and masculine.  Christian Dior’s first collection, presented in 1947, was the antithesis of this. He brought a breath of fresh air to fashion and celebrated elegance and femininity with his “Bar Suit,” a tailored, soft shouldered jacket over a chic, accordion pleated skirt.  This revolutionary style became known as “The New Look,” and was enormously successful.

Christian Dior believed (and I agree!) that what made a woman fashionable was not only her clothing , but also her shoes, handbag, hat (I wish women still wore hats!) accessories, makeup and even perfume.  In 1947, Dior was the first designer to introduce his own perfume, the legendary Miss Dior.  Although it seems that every fashion line and celebrity has a perfume, Dior was a real pioneer in launching a perfume.  The Dior perfume collection now consists of more than one hundred scents, including such iconic names as J’Adore and Poison.

A picture tells a thousand words, and the arrival of Christian Dior on the international fashion scene coincided with the emergence of photography as an art form.  Dior’s creations were soon captured by some of the most talented photographers of the day, including Irving Penn, Richard Avedon and Cecil Beaton. An entire wall of the museum was devoted to a collection of fashion magazine covers featuring models wearing Dior creations. 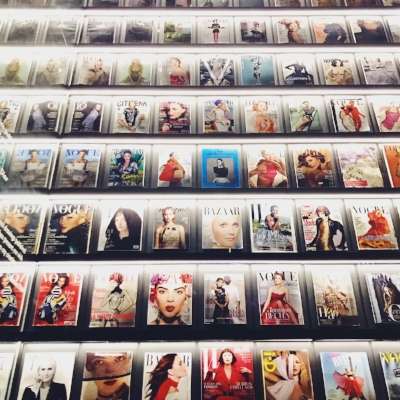 Christian Dior truly appreciated the role of color, explaining that:

“A Touch of Color is all you need to change your outfit. . . an emerald scarf, a bright red dress, a sparkling yellow wrap, royal blue gloves.”  For Dior, each color has an important meaning:  black is the color of absolute elegance, white is purity, red reminded him of the façade of his childhood home in Normandy (Dior became known for his red so much that it has become known as “Dior Red.”)  Orange and violet were symbols of the Orient, and pearl gray was reminiscent of the 18th century.

This color story was so exquisitely conceived and displayed.  It separated the fashion by color and included not only “life size” dresses, but miniature dresses in the same intricate detail, as well as handbags, shoes, jewelry, etc.  The colors were beyond gorgeous and I could have spent a day studying each and every detail!  A few of my favorites: 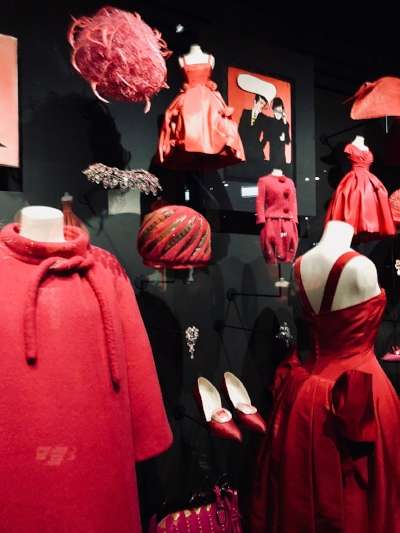 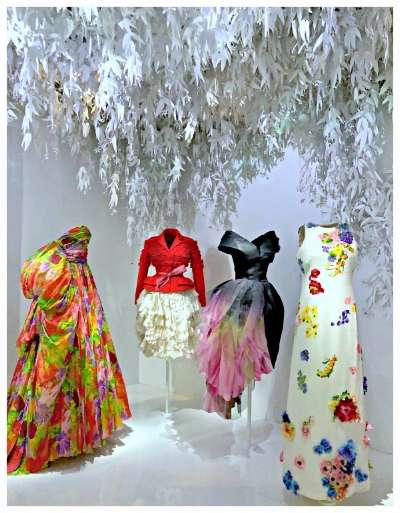 “After the woman, flowers are the most divine creation” —Christian Dior

Flowers were an important source of inspiration for Dior and his first collection is informed by the notion of “femme-fleur” (woman-flower).  Walking into this  salon in the exhibition was like walking into a wonderland.  Suspended from the ceiling were white flowers and leaves, and the dresses on display were not only breathtakingly beautiful, but so creatively and effectively displayed. 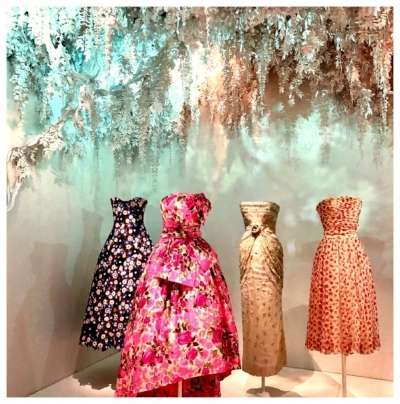 Something one doesn’t see often in a museum exhibition is a live presentation.  This one demonstrated the production of the iconic “Lady Di” leather handbag.  An artisan from Florence took us through all the steps in creating the leather bag made famous by Princess Diana.

And here is the finished product! 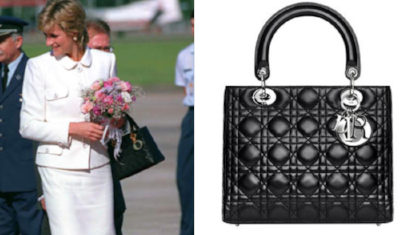 The exhibition also featured the work and inspiration of the six artistic directors of the House of Dior who followed Christian Dior and examined how each was faithful to the spirit of Christian Dior while exploring new frontiers to appeal the modern woman: 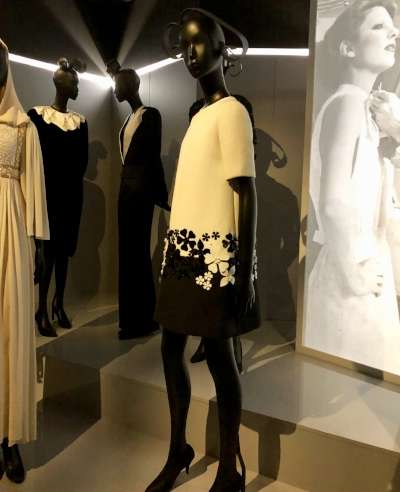 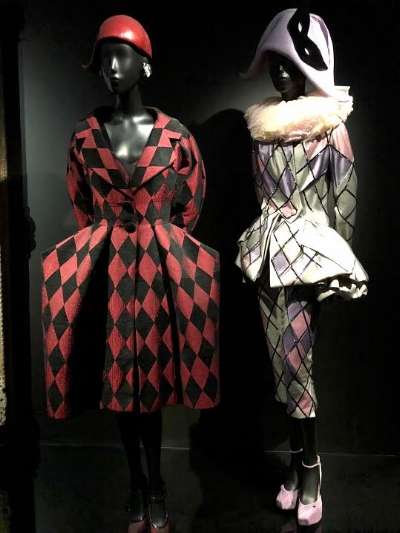 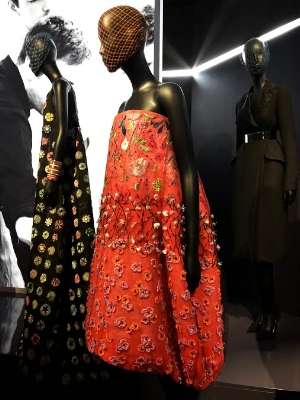 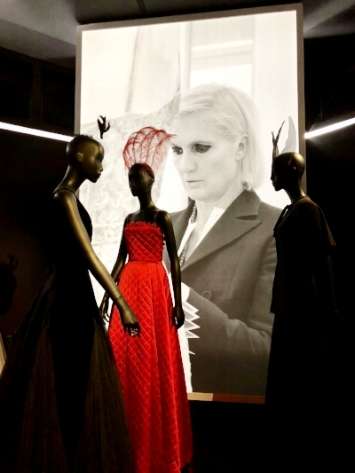 The exhibition concluded with a magical room inspired by the Hall of Mirrors in Versailles, featuring twinkling lights and dresses displayed from floor to ceiling. 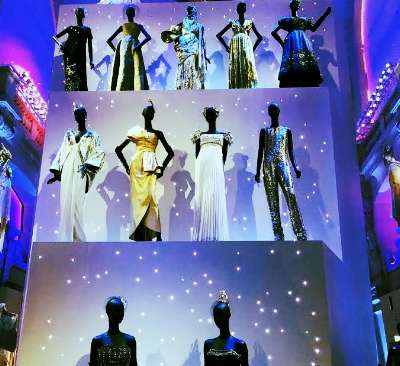 The final section is footage of the many luminaries who have been outfitted in Dior creations, among them Princess Diana, Princess Grace, Jacqueline Kennedy and Elizabeth Taylor, as well as more modern celebrities like Celine Dion and Julianne Moore shown behind a display of the dresses. 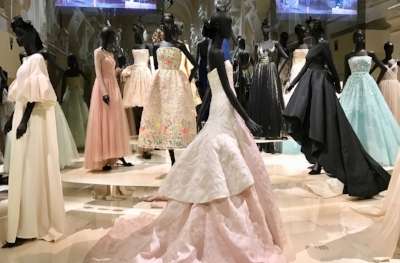 The exhibition was not only a history lesson, but a feast for the eyes, unlike any show I have seen.  And what a thrill it was to experience this with my two daughters.  Although gone are the days where ladies wore hats and gloves with their ensembles, it was such fun to have a glimpse into those days and to fantasize about wearing some of that finery! 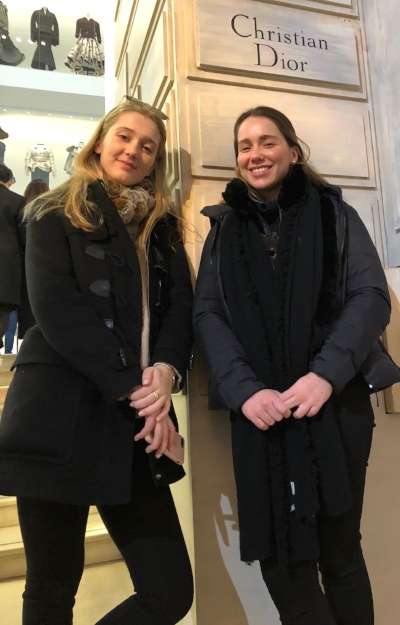