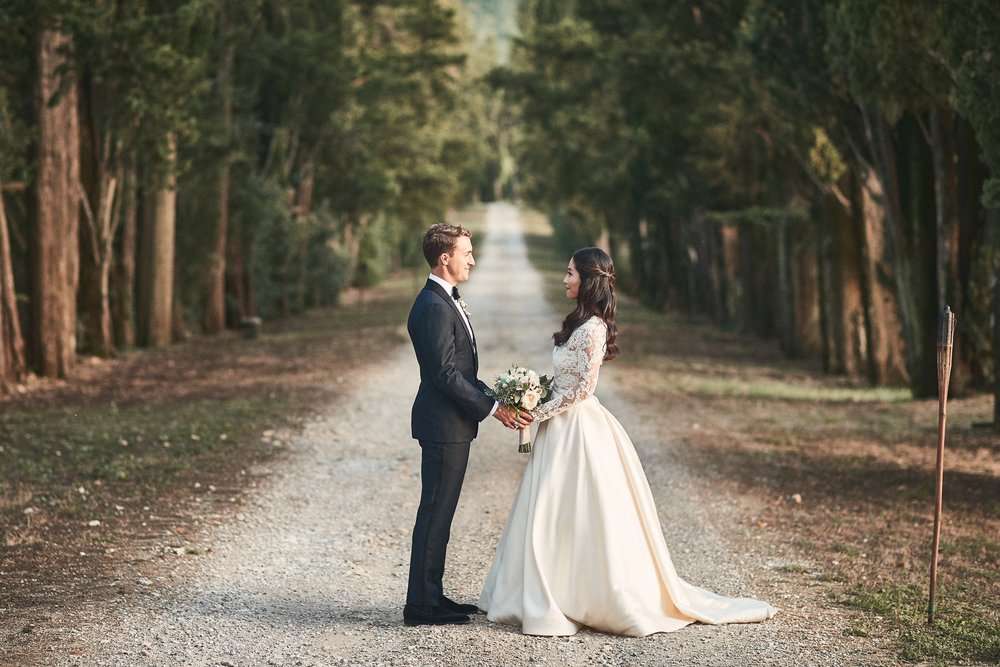 I don’t normally write about weddings, but I recently had the pleasure of being part of a magical weekend in Tuscany.  The entire event was truly unforgettable.  Full disclosure here–the groom is my nephew, Ryan, and I have a special place in my heart for him and his beautiful bride, Chisato.

Guests arrived in Italy from all over the globe to celebrate this special couple and their wonderful families.  (The bride’s sister had herself been married only a few months ago — in Hawaii!  This family has logged some serious mileage!!).  Our home for the weekend was the charming Borgo San Luigi, nestled in the Tuscan hills in the village of Monteriggioni.

The night of our arrival, guests were treated to a buffet of homemade pizzas (the chef made them in front of us!), pasta, salads and a delicious spread of Italian meats and cheeses.  The poolside supper was followed (of course!) by homemade Italian gelato.

The next day, it was off to Chianti, where we spent the afternoon at the Badia  a Coltibuono winery.  The drive to the Chianti winery resembled a postcard, with winding roads overlooking the hills of the Tuscan countryside, dotted with olive orchards and vineyards. The vineyard, a former monastery, dates back a thousand years (yes, that is 1000)! Although the grapes are no longer grown at this site (the altitude makes for less than favorable growing conditions), the wine is aged here in solid oak casks. 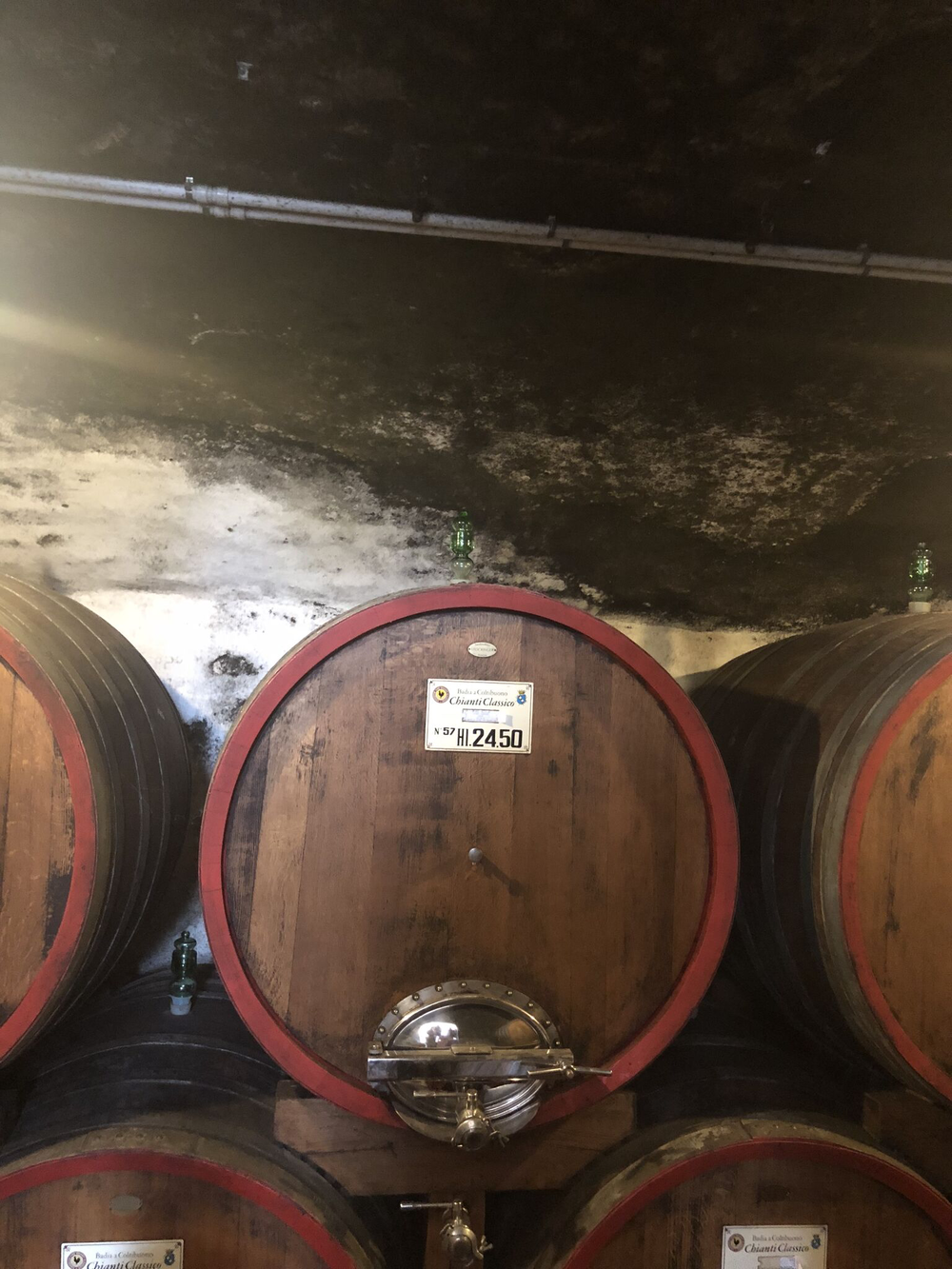 Many of the “important” reserve bottles are stored here as well.  While many of the older bottles were lost or taken during the Second World War, there remain a handful of bottles from the 1930s. 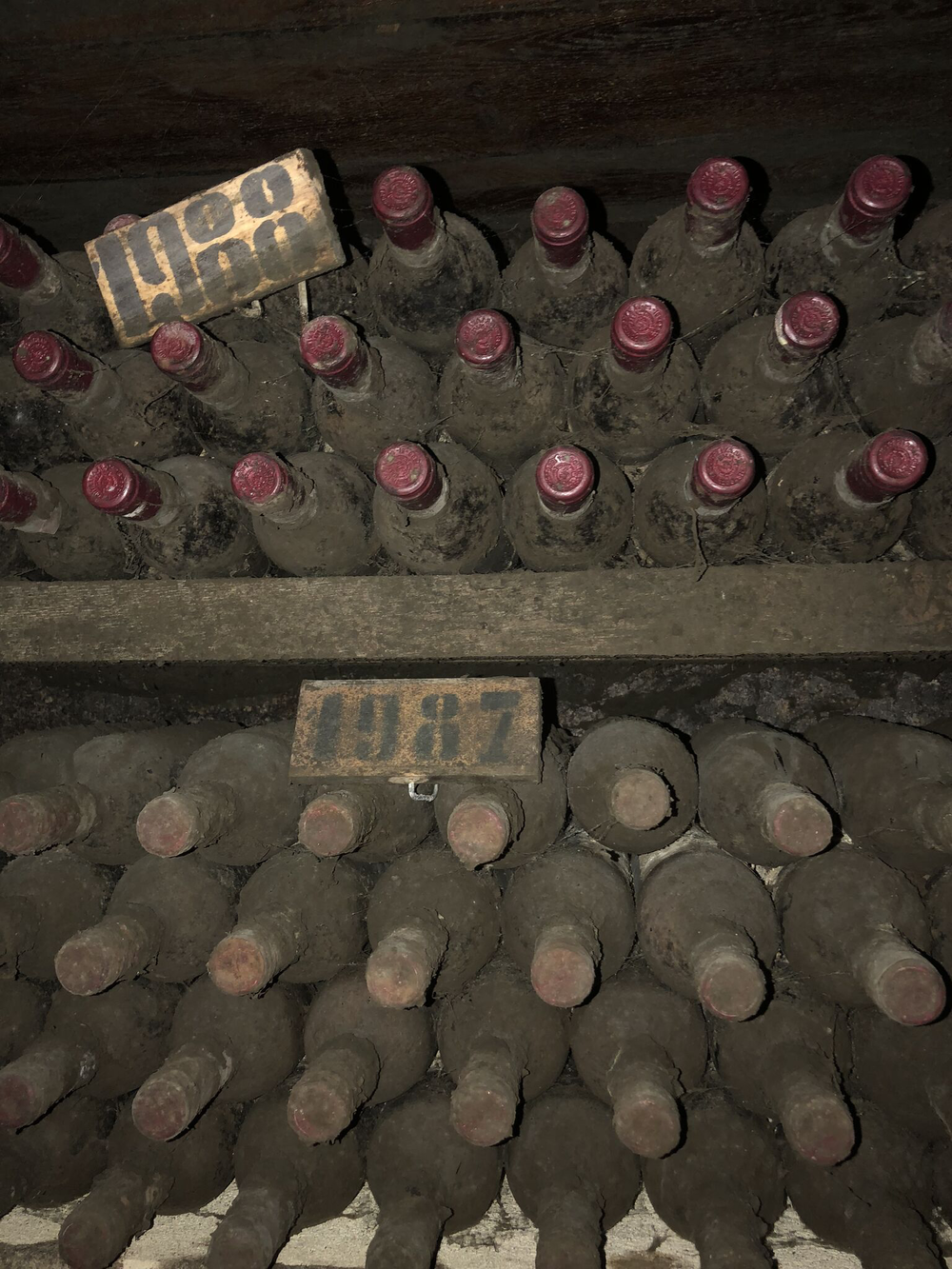 The winery is surrounded by picture perfect gardens and includes some of the original furniture and artwork built and used by the monks who lived there for centuries.  I was as fascinated by the interior as much as the wine cellars! 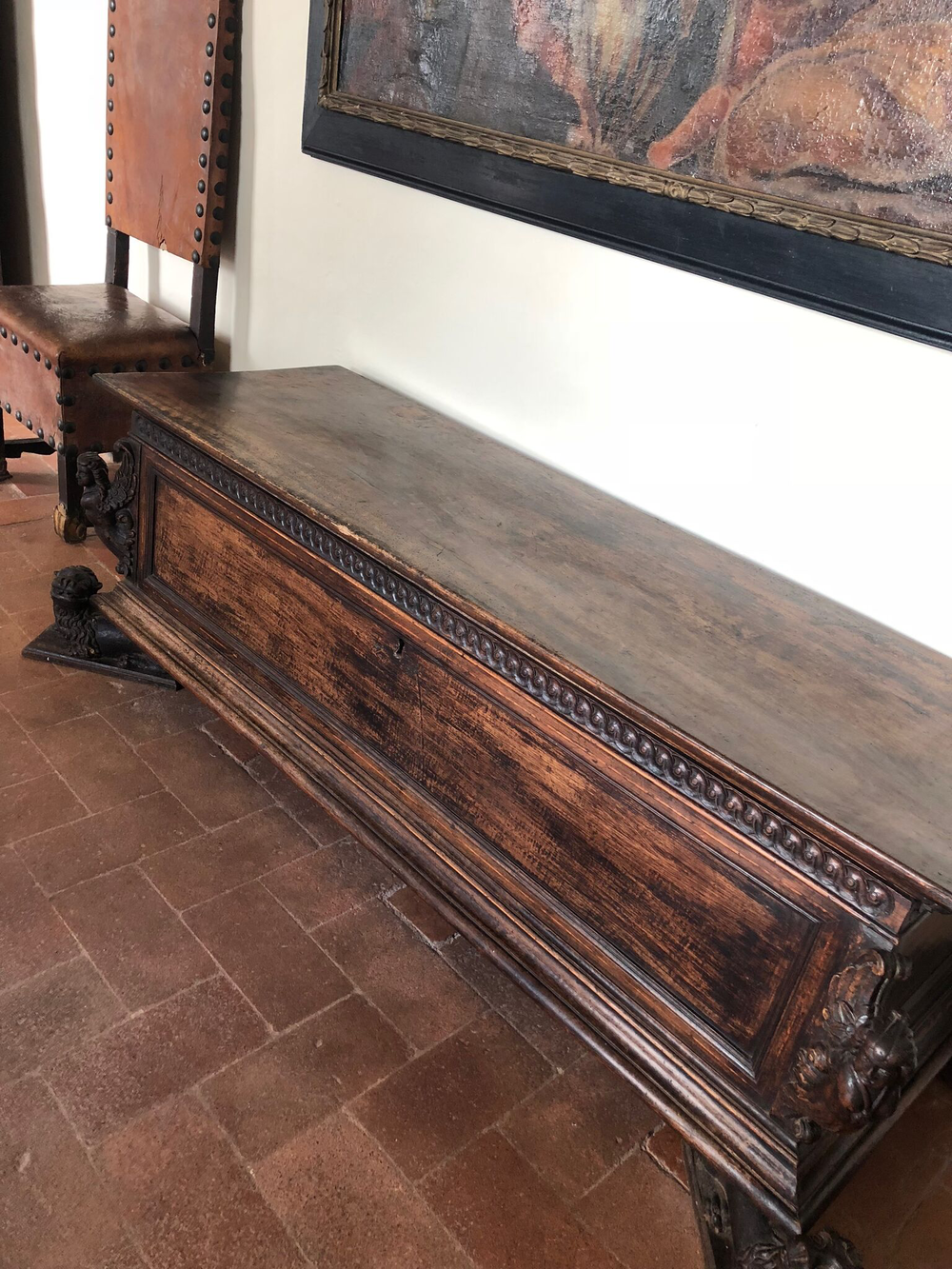 Following a tour of the winery, we feasted on a five-course meal accompanied by different wines (of course!).  This was not for the faint of heart! 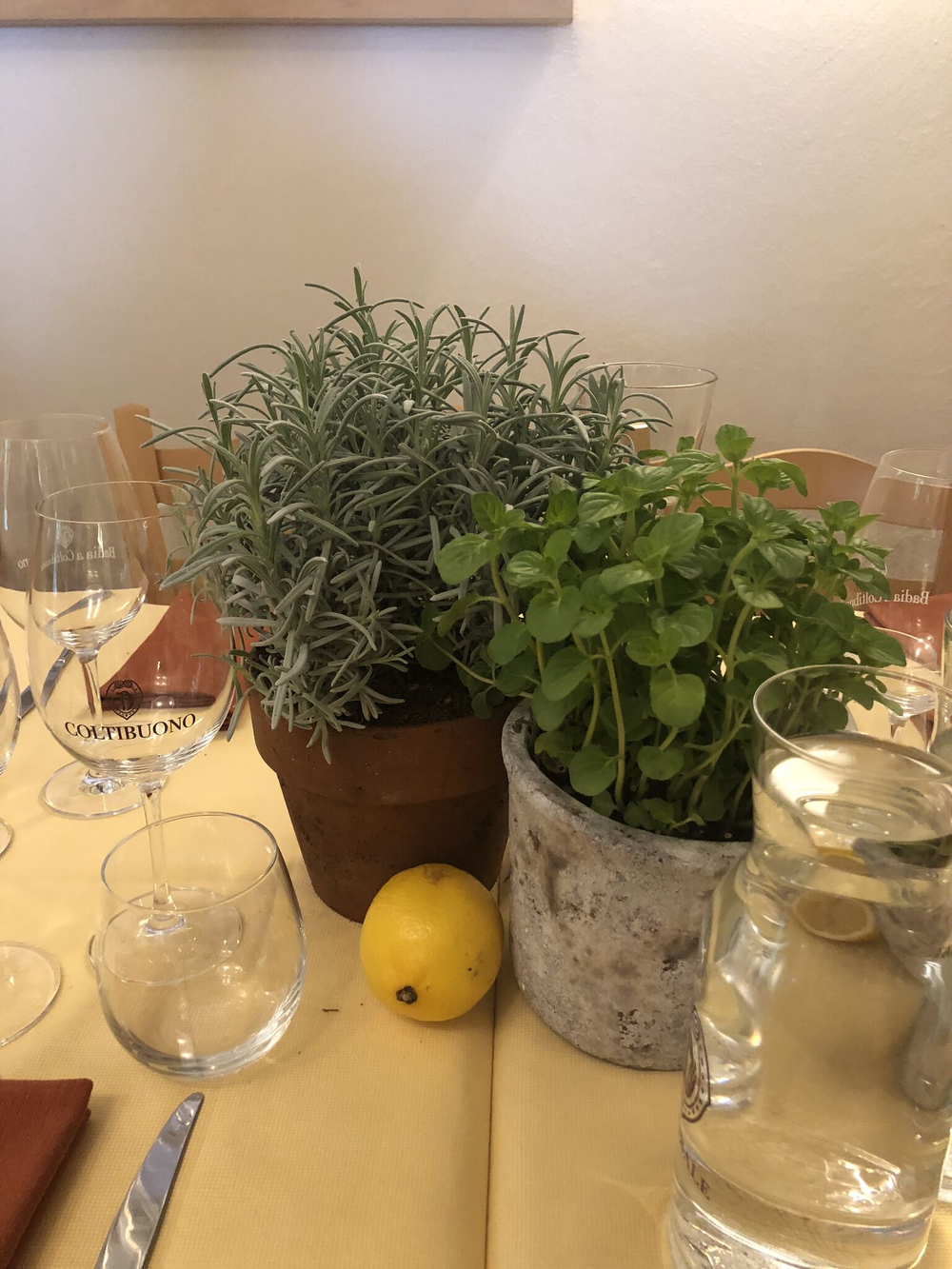 I loved the simplicity of the centerpieces–pots of fresh, locally grown herbs and lemons.

The dress code for the day was “garden chic” and it was so fun to see all the colorful floral dresses! 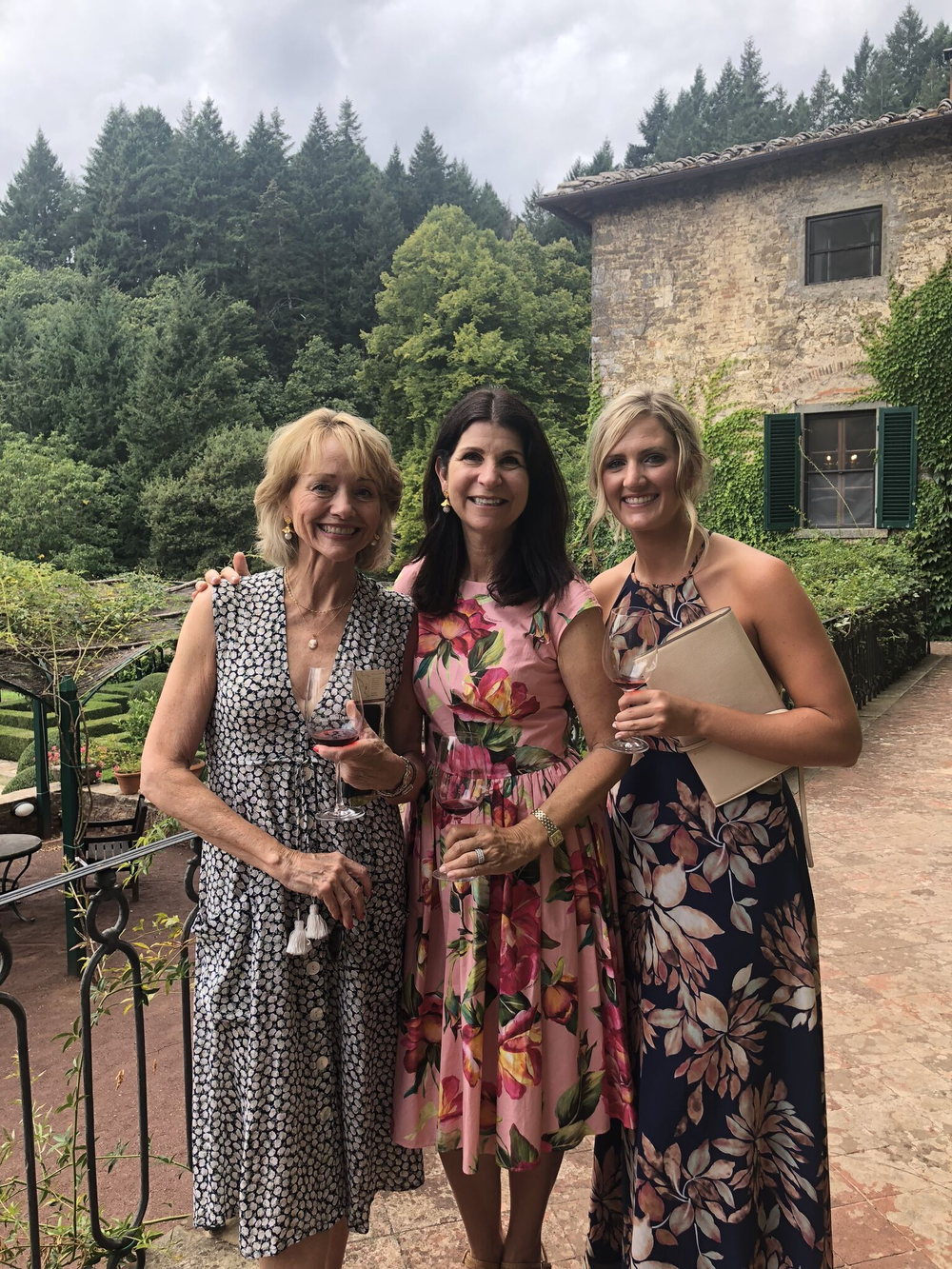 I thought it was the perfect occasion for my Danielle Rollins floral dress! 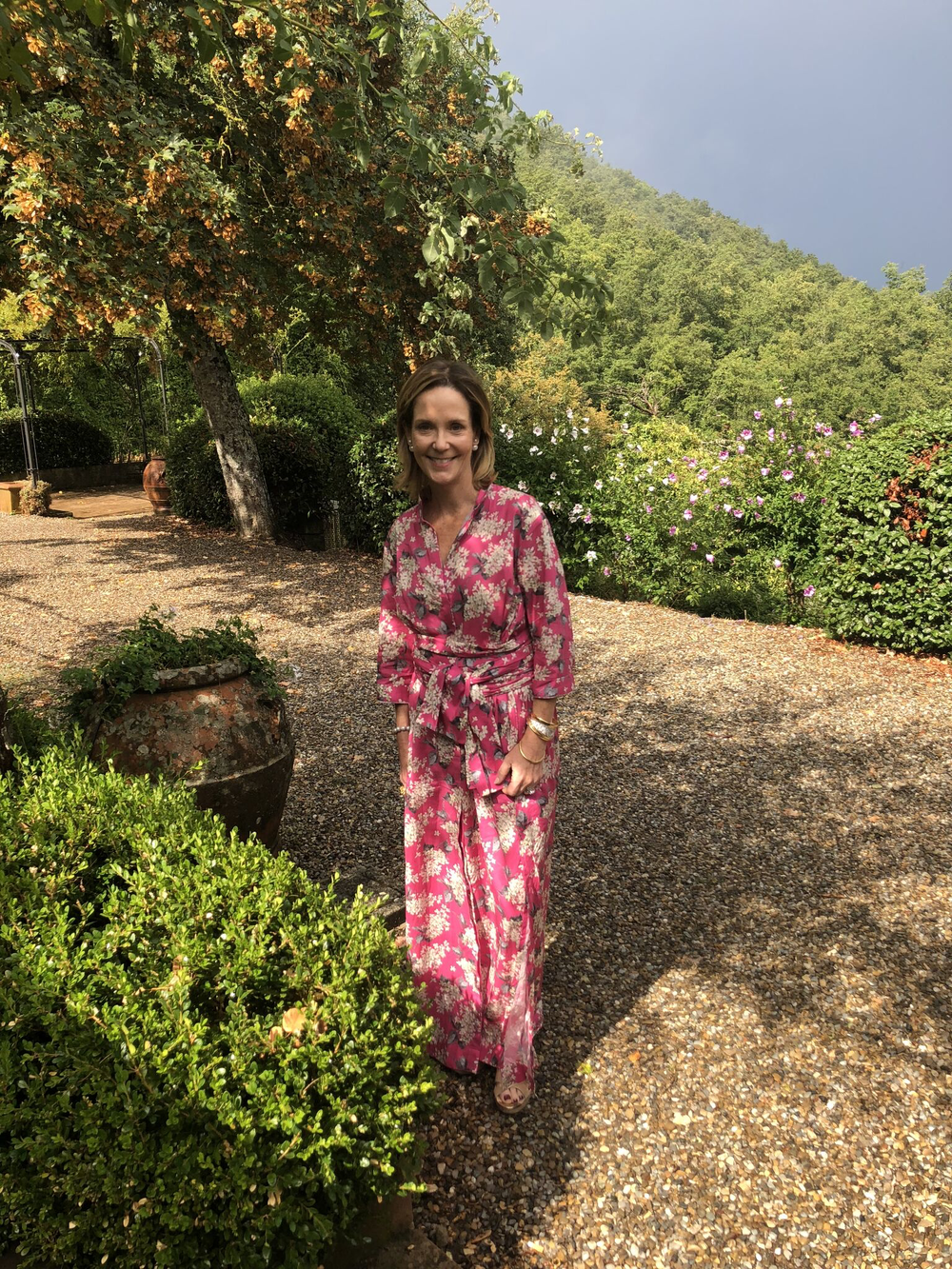 Despite a forecast of rain, the morning of the big day brought sunshine and blue skies.  The ceremony and reception were held at the Borgo Stomennano, near Sienna.  This magical villa was built on ancient Estruscan and Roman ruins, still visible today.  The setting, surrounded by the lush Tuscan countryside, is the stuff of fairy tales. 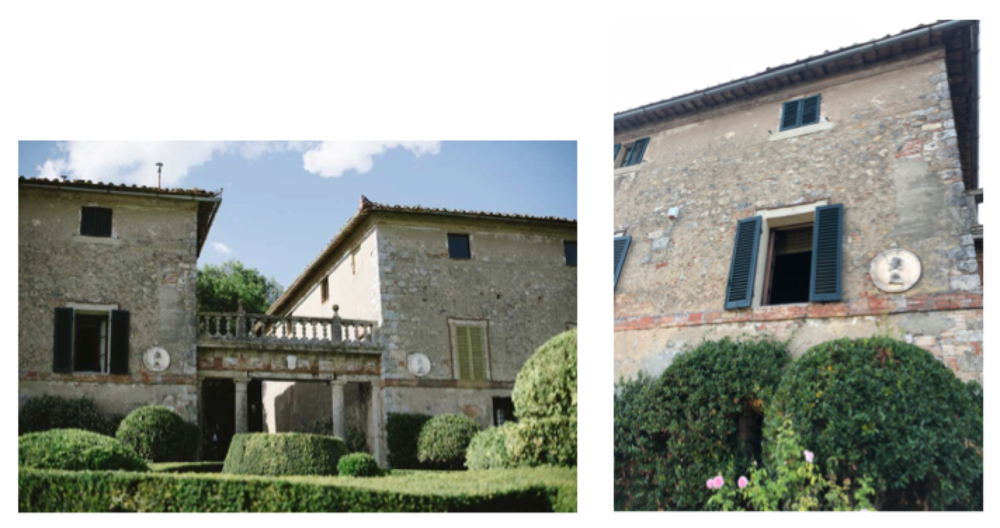 Guests gathered in the early evening and were greeted by a string quartet. 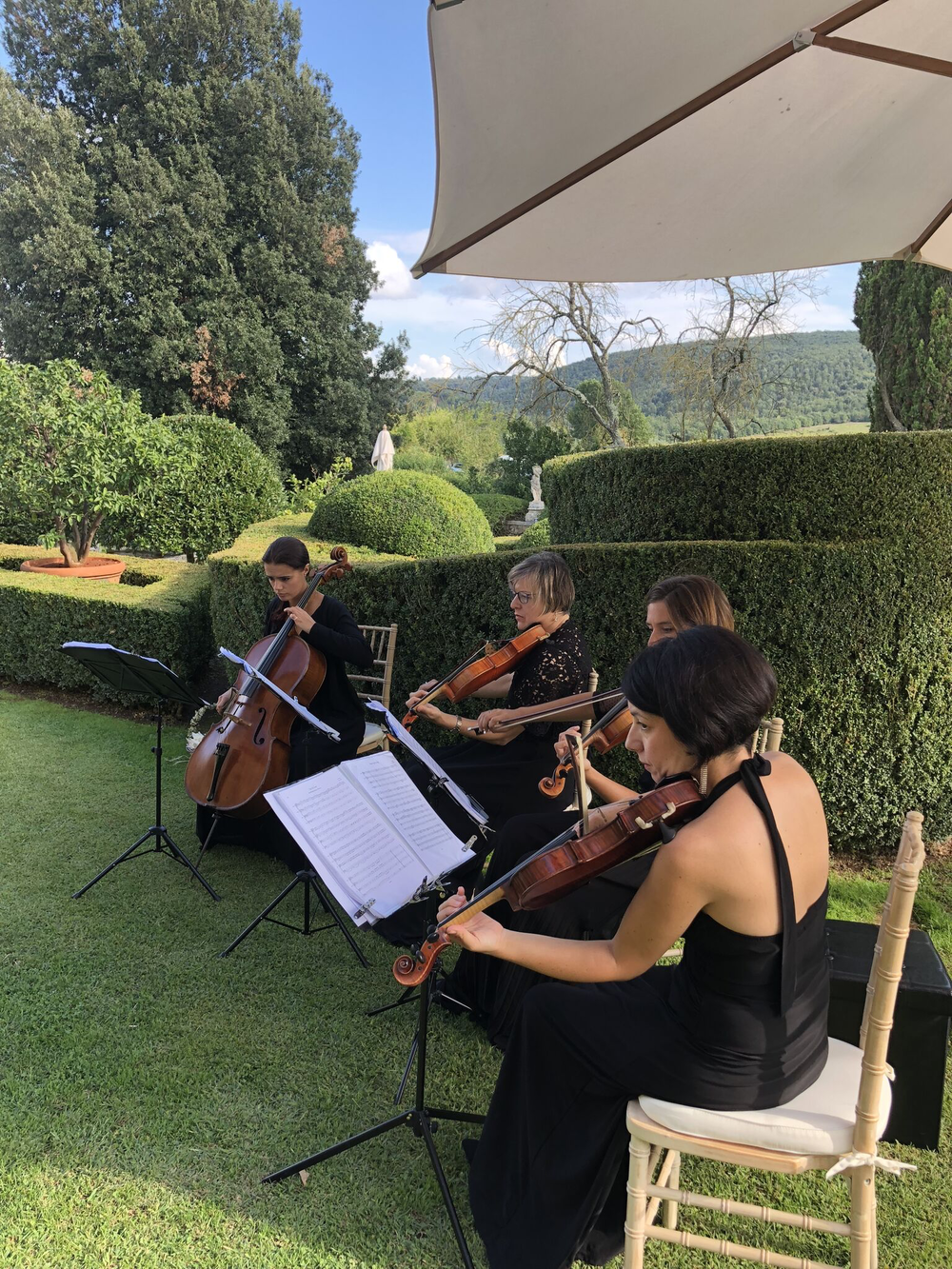 Flowers adorning the wedding arch and seats were in blush pinks and creams with accents of green. 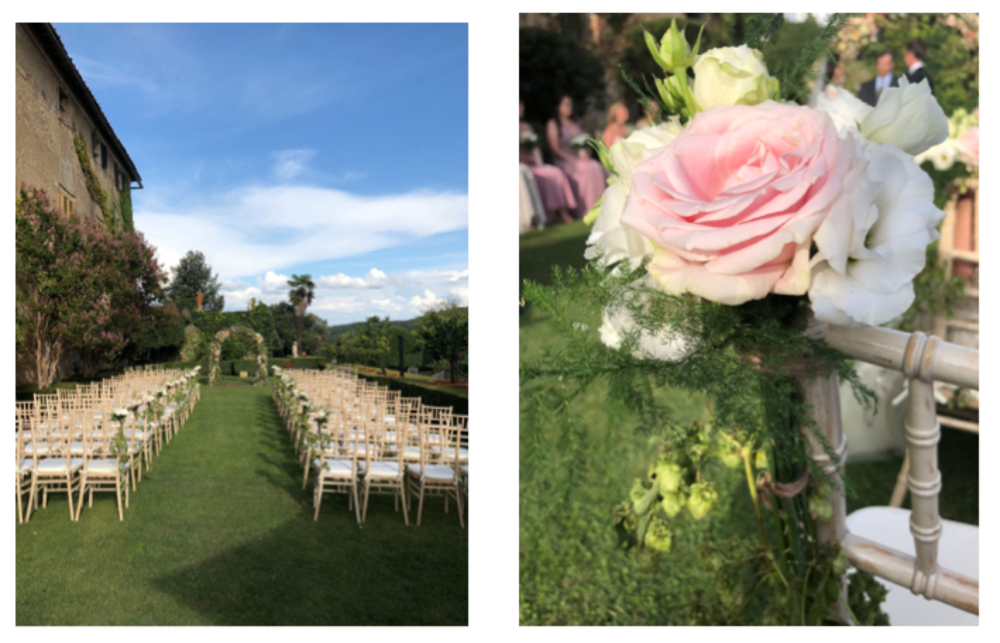 Coming from two different backgrounds, the bride and groom included elements from each in their wedding ceremony.  The bride, who was born in Japan and raised in the US, introduced us to the “333” ritual.  The significance of the number 3 is that it cannot be divided by 2.  It also symbolizes love, wisdom and happiness.  Ryan and Chisato each drank three times from three cups of sake.  Ryan, who was raised in the Jewish faith, broke the wine glass, as is the tradition in a Jewish wedding.  This symbolizes that the old life is broken and a new life is beginning.

The moment we had all been waiting for finally arrived.  The bride, in an exquisite ivory dress of silk and lace (and a million dollar smile!), walked down the aisle to oohs and aahs and genuine tears of joy.  Her groom even shed a few! They wrote their own vows, each spoken from the heart.  Once the ceremony concluded, the party began!  The cocktail hour featured wine, prosceco, a raw bar, and a bountiful spread of Italian meats and cheeses.  A veritable feast, and this was only the beginning! 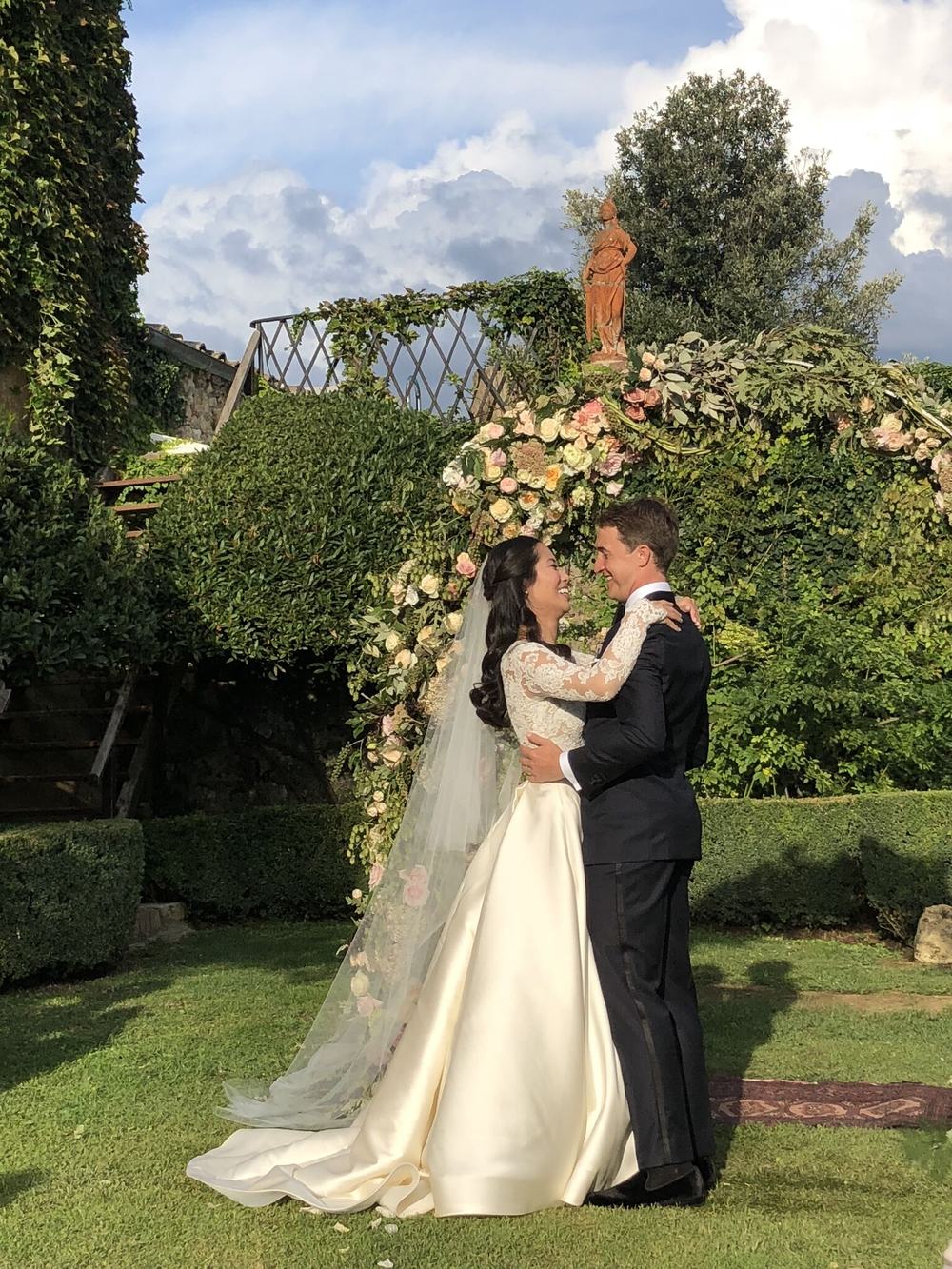 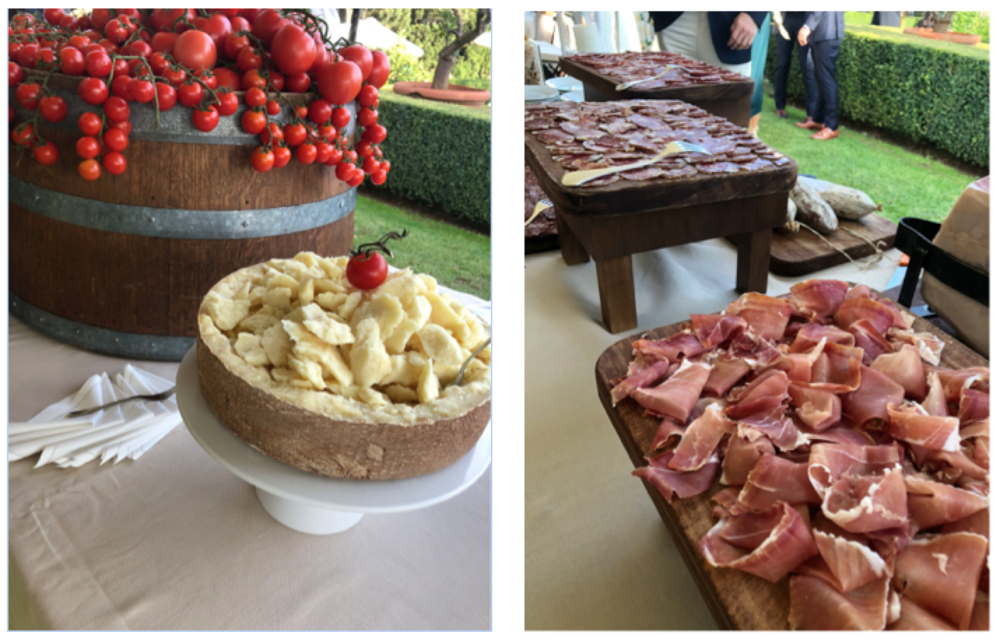 Dinner was served a pebbled garden under the trees, lit by candles and strings of lights…a truly SPECTACULAR setting. 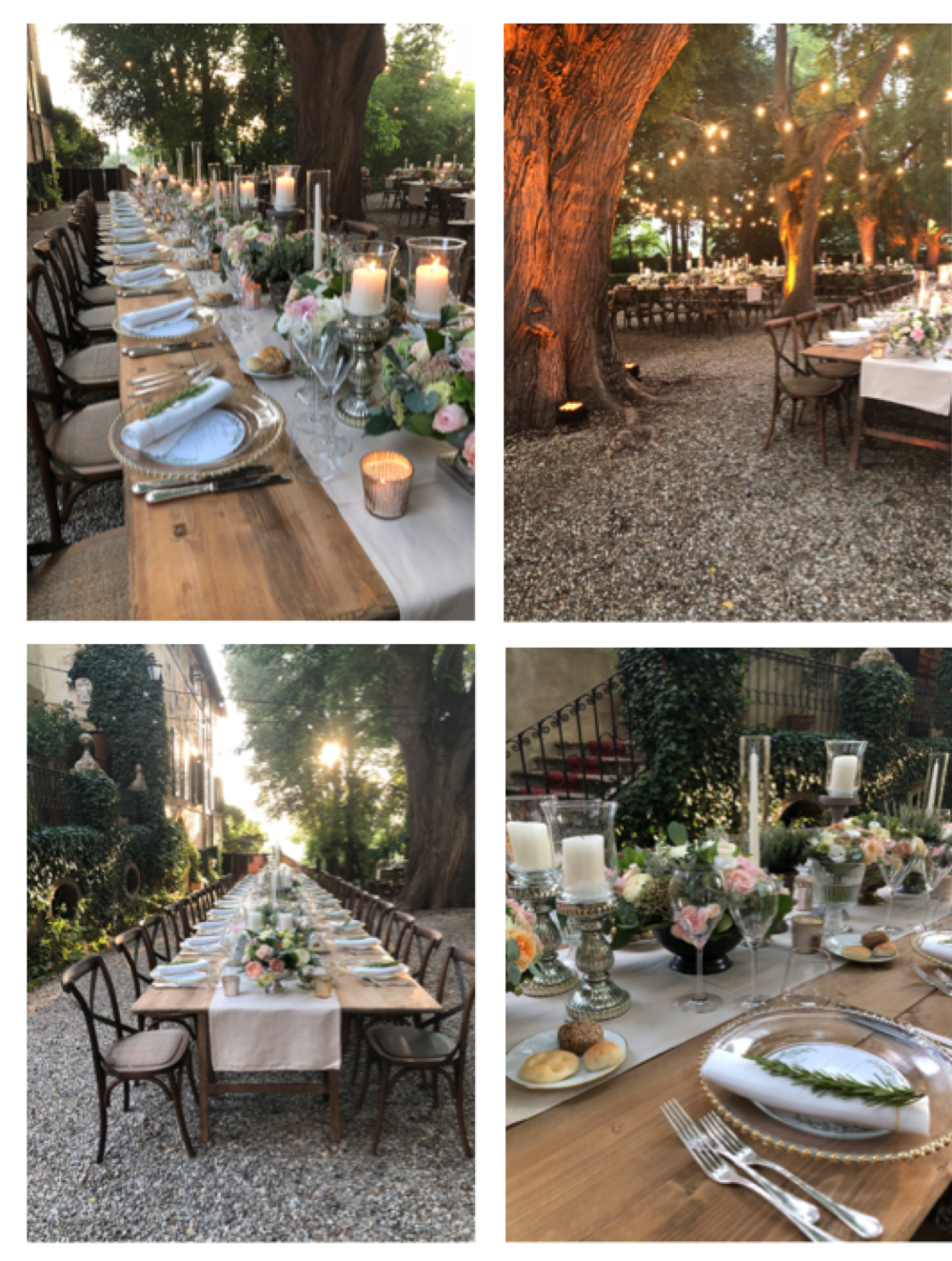 After feasting and toasting, the guests were led to the pool terrace, transformed to a dance floor, magically lit by ceiling of lights.  Following the Italian tradition, the wedding cake was “made” before our eyes.  Two chefs prepared layers of wafer, cream filled with chocolate morsels, topped with fresh berries and sugar.  A truly impressive show! 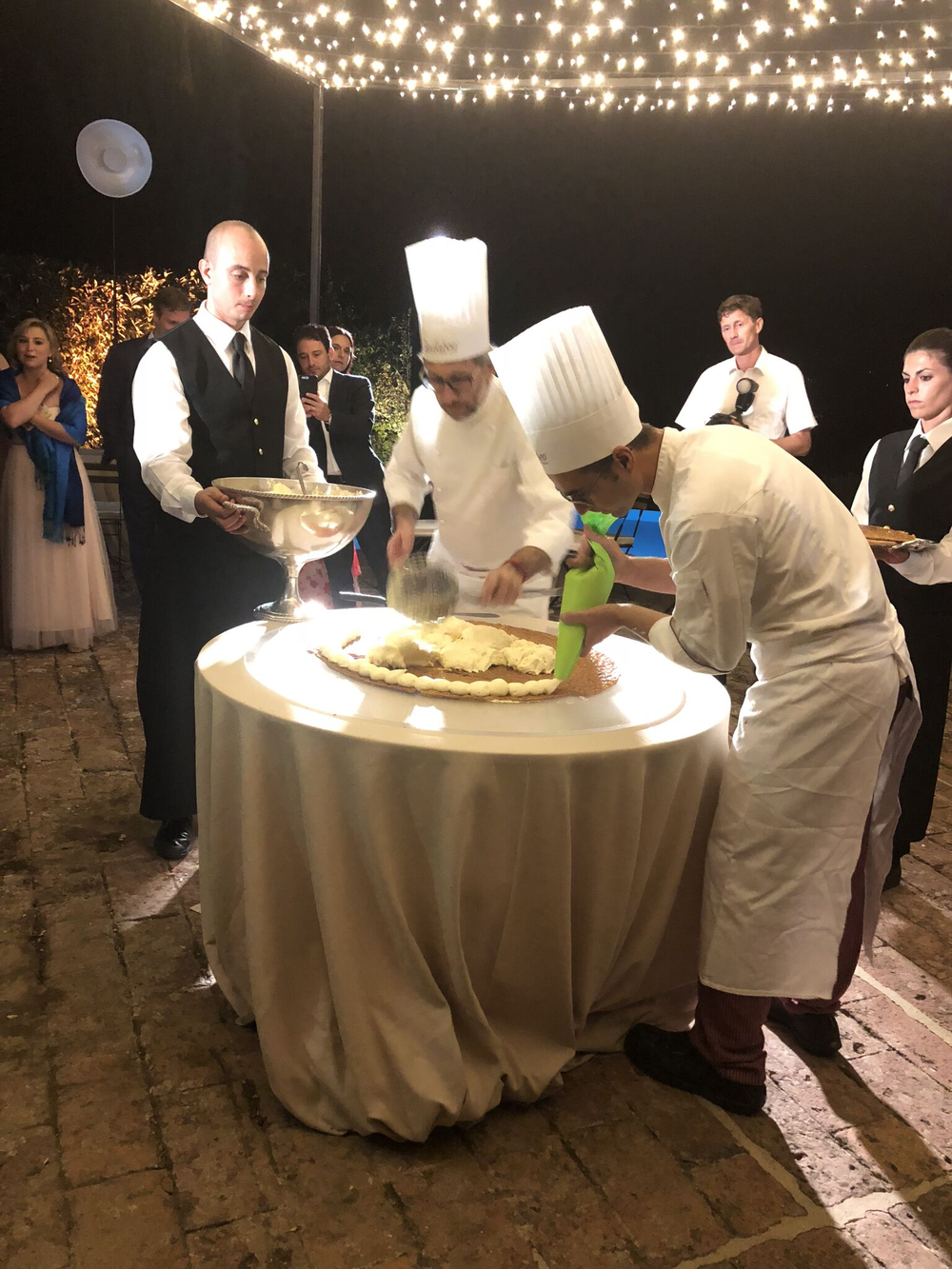 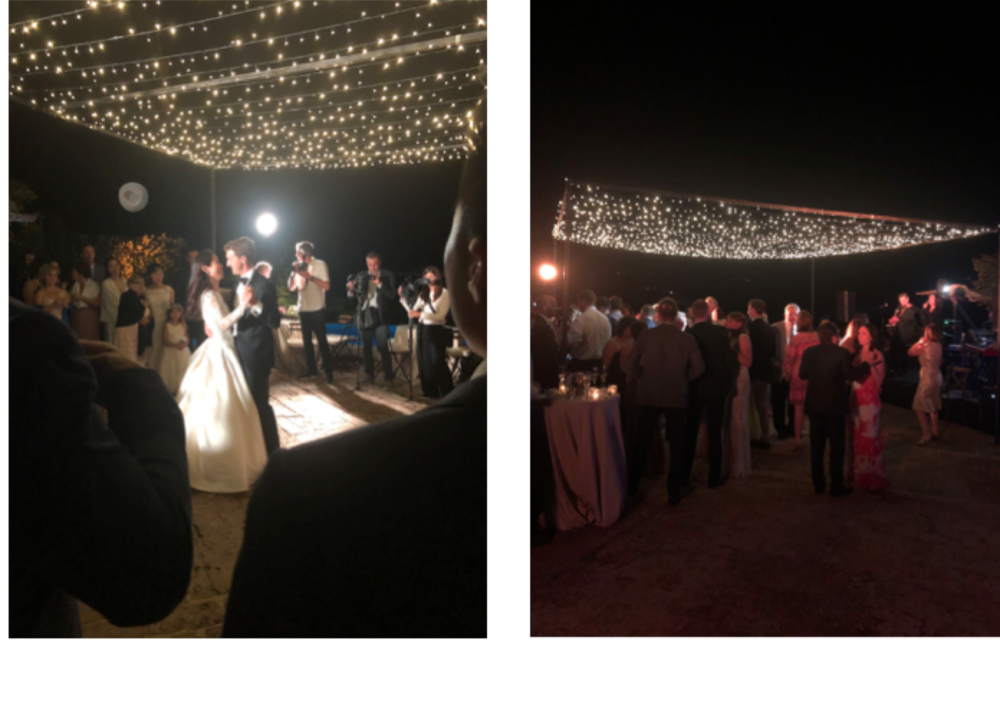 Dancing and partying continued into the wee hours of the morning.  No one wanted to leave this moment.  I’m quite certain that everyone realized that this experience, filled with beauty, family and love, was one to treasure forever. 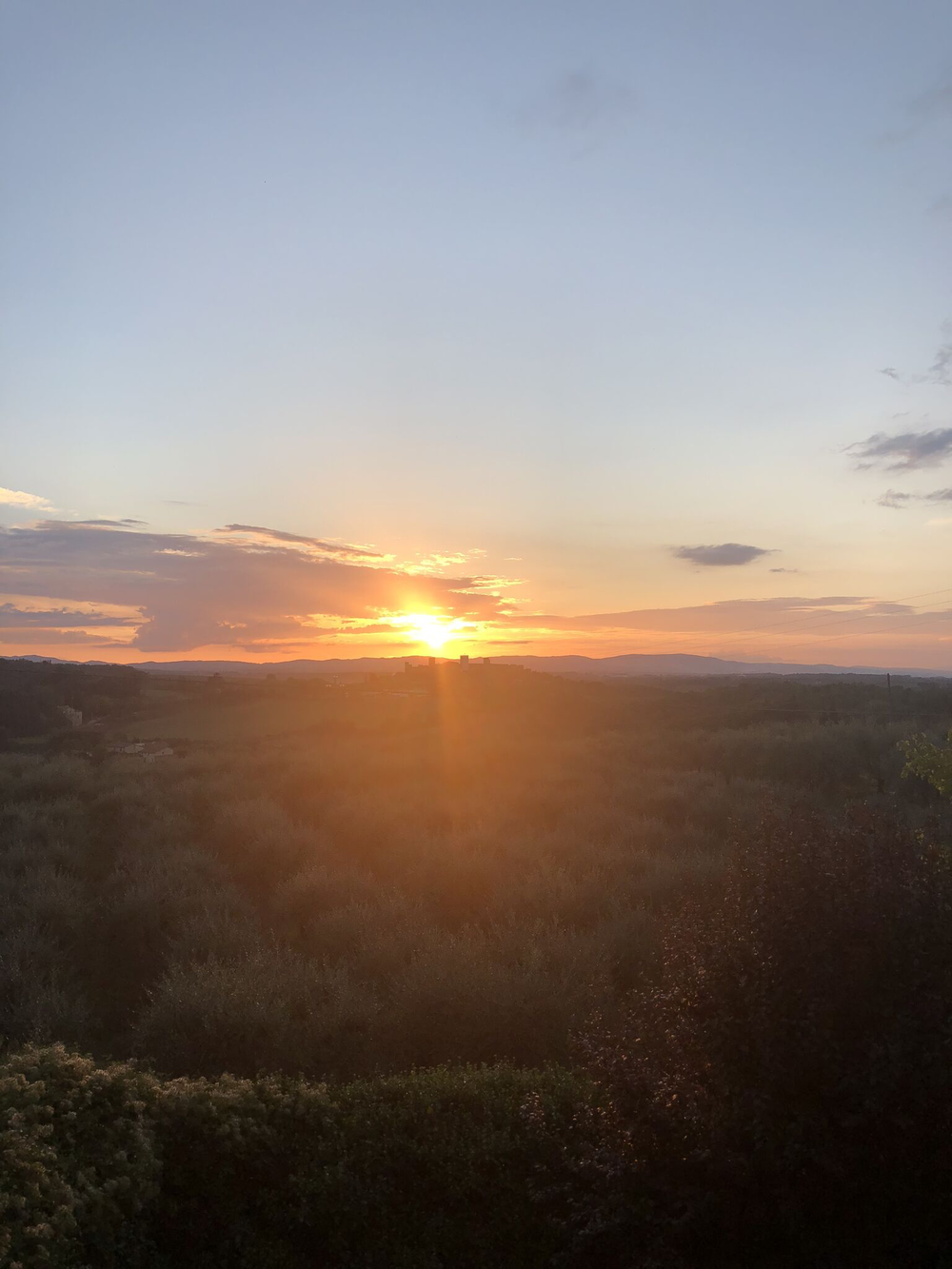 The magic of a Tuscan sunset